What to do on a gloomy day of Quarantine 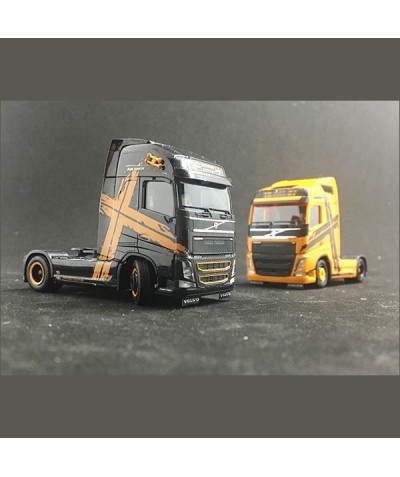 The pandemic arrives: Covid19, the quarantine, we can't leave the house, what can we do if we don't make a good project?
The idea is to make something special, new ... but always in my favorite scale: 1/87. Let's take a truck that I really like and that has returned to the limelight because the version of the older brother 1/24 has just come out: the VOLVO FH4.
The starting point, as always, is the Herpa box and as I anticipated I want to make something new, so I will take two standard colors one made some time ago and a classic one, because this time I want to dedicate myself to taking care of every little detail.

I started by dismantling the model in every single component in order to then make the changes and add the steering wheels, as far as Herpa is concerned it is easy to dismantle the models being all interlocking.

then I choose the livery and I want something classic but I also want to stand out, so I choose to use two standard decals of our line for 1/87.
From the Performance Edition series I choose the colors orange and black, hence the vague idea that I had in mind takes shape.
I decide to make two identical but specular models: one black with the orange cross and one orange with the black cross.

Now I'm starting to have fun but I realize that I don't have real good images of a VOLVO FH4 that I can inspire, I decide to search the web and after thousands of views I can find what I was looking for, finally now I can start!
On Herpa models, even if well made, the part of the air and electricity system that goes from behind the cabin to the trailer is totally missing. I decide to make them independently but the result with the plasticard does not satisfy me so I make my frame with the distributors in 3D, after various tests and adjustments I managed to find the right combination, but this was the easiest part! After painting and highlighting it, I put the hoses made with colored micro iron wire and it was the most difficult part. Hence the idea of ​​creating an article in the catalog dedicated precisely to this lack of the Herpa model so that everyone can complete it.

But asono wanted to go further with the changes to the original model and I completely self-built with plasticard, and painted with matte black, the brackets that hold the bulkheads behind the cabin ...

I am not yet completely satisfied and I also want to rebuild the pistons that hold the spoiler high in the cabin and while there are also building a structure where I put two spotlights on it that illuminate the hooking and unhooking operations ...

Do you think I'm done with the additions? Of course not! I want to rebuild the frame that acts as a handle and protection to help the operator get up when going to perform the hooking and unhooking maneuvers ...

No, still not enough I also want to rebuild the wiring and filters and sensors that are on the chassis before and after the turntable to the battery and while there are also I put the wiring to the tank and the switch to disconnect the battery behind!

I change the rear lights to the more realistic ones that we made in 3D and found in the catalog, I add the fire extinguisher behind the cabin, I add the mudflaps behind and in front to make everything more aggressive and it seems to me that we are almost there ... ah no actually missing the three classic Volvo antennas ... okay I'll wait another gloomy day to add them!