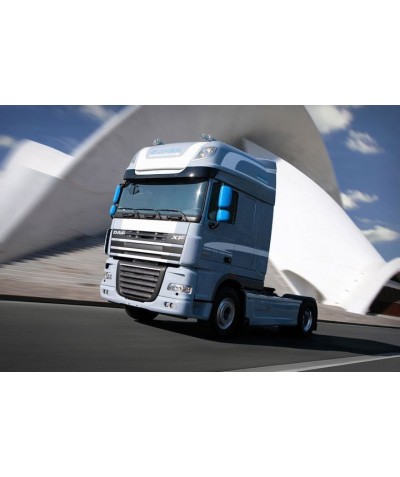 Following the success of DAF's "White Edition", its "Blue Edition" is now rolling off the production line at its headquarters in Eindhoven. Just like its predecessors in the "Limited Edition" model series, the XF105 Super Space Cab "Blue Edition" stands out with its unique paint color and many detailed features. This special series with the impressive Super Space Cab with Skylights, designed specifically for the German market, is a calling card for any transport operator. The exterior of the XF105 "Blue Edition" is distinguished by its unusual paint color and the blue contrast of the mirror covers.

The XF105 "Blue Edition" is equipped with the 460hp version of the Euro 5 specification 12.9-liter PACCAR MX engine. The 12-speed AS Tronic automated gearbox and 2.69: 1 final drive provide efficient transmission. Safety features of the "Blue Edition" include an EBS brake system with ZF Intarder, ASR and xenon lighting with headlamp washers. Two fuel tanks with capacities of 850 and 340 liters, as well as an AdBlue tank with a capacity of 100 liters, ensure a large active radius. And a comprehensive spoiler package, with roof spoiler, side fenders and side skirts, provides optimal aerodynamics. Two chrome-plated air horns and attractive Alcoa aluminum wheels complete the vehicle's exterior.

The interior of the XF105 "Blue Edition" also offers everything the most demanding driver could wish for. Standard features include a leather steering wheel, a comfort seat with air suspension, a dashboard with an aluminum finish, a refrigerator with a capacity of 42 liters under the bunk, an Eberspächer cabin heating and an automatic climate control. The XF105 "Blue Edition" is also equipped with the acclaimed DAF Night Lock, which offers drivers protection from break-ins and theft. A complete audio system and a navigation system are also included in the extensive equipment of the "Blue Edition".