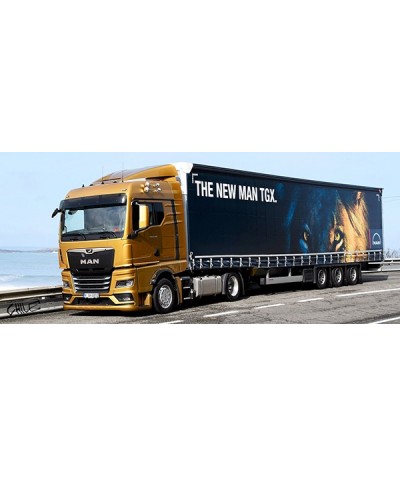 In 2008 it celebrated the 250th anniversary of its foundation. The origins of MAN, in fact, can be traced back to 1758 with the foundation, in Oberhausen, of the company "Hütte St. Antony", the first heavy steel company in the Ruhr area. The companies from which MAN was born produced the first German presses for the printing of newspapers and books, which allowed a large circulation and the diffusion of the first means of mass communication, built the first chillers of Carl von Linde and they designed, developed and built, together with the inventor ing. Rudolf Diesel, the internal combustion machine best known as the first Diesel engine, at the end of the 19th century.
MAN was also active in the production of railway rolling stock, steel infrastructure such as bridges and large canopies and monorails (including that of Wuppertal). The German group also produced the famous Panzer V Panther tank.
On 21 June 1915, the company "Lastwagenwerke M.A.N.-Saurer" was registered in the commercial register of the city of Nuremberg.
In 1920 MAN set up a first repair shop with an external spare parts warehouse in Munich in the Schwabing district. Maintenance, cleaning and checks carried out directly at the customers: the overhaul service was born!
This principle took hold internationally and by the end of 1938 more than 2,400 MAN vehicles were followed in 47 countries.
In 1971, MAN acquired the German company Büssing and entered the passenger transport sector.
120 countries: This is the number of countries where the new generation of MAN trucks will be launched in 2020 and 2021.
To carry out the new MAN TG project started in 2015, more than 700 drivers were interviewed in the parking areas to find out what their most important points were.
Engineers, designers, testers and manufacturers have been working on the details of the new series for more than five years. The advice of 150 clients from thirteen different countries around the world has allowed us to understand and meet their needs.

All the improvements made in the new generation of MAN trucks have reduced fuel consumption in a standard vehicle with a D26 engine (Euro 6d) by 8% compared to a vehicle from model year 2018 (Euro 6c).
It took five years to develop the new MAN TG truck project from May 2015 when the idea was conceived until February 2020 when it was officially presented in Bilbao (Spain).

Among the various tests carried out, there was also Climate testing: the components of the new TG were exposed to the extreme temperatures of Sweden and Spain and countless environmental impacts were simulated. These processes make it possible to ensure the correct functioning of the materials over time in all conditions.

Suggestions and new needs came from different sides: from MAN repairmen and mainly from MAN customers, who brought suggestions for improving the previous truck family. The legal requirements on accident safety, which will apply from 2021, also played a role in these considerations: MAN must launch the new model at the latest.

After the official presentation in Bilbao, the feedback has been really excellent. Many customers expressed their gratitude for listening to their needs and making their wishes come true.

For more information on the interior and the instrumentation you can go to this link: MAN Cockpit

A single example can suffice to understand at what levels the new news programs have reached:
The door controls allow the driver to control important truck functions from the outside, such as the activation of the hazard lights or the activation of a working light. This is especially convenient on a construction site or in delivery traffic. 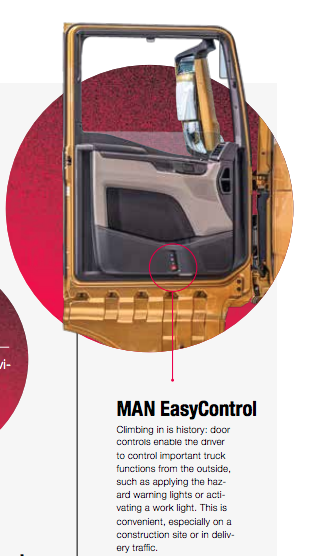 This is like the remote control to manage the air conditioning and cabin instrumentation conveniently located on the rear bed.
Technology and details to discover for those who are passionate about the new MAN TG in this magazine: