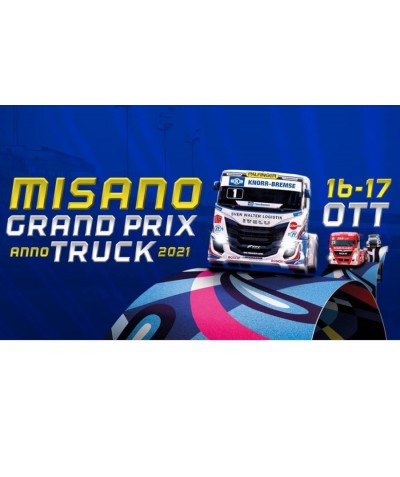 The 2021 Truck Grand Prix will take place on 16 and 17 October, the date set for the only appointment in Italy of the FIA European Truck Racing Championship, ready to return to Misano World Circuit to conclude the racing season at "Marco Simoncelli". It will be a great event, enriched by the final award ceremony, in the presence of the sports authorities. It had never happened before the FIA ETRC ended in Italy.

The 2021 season will therefore begin in Hungary on 12 and 13 June, and will feature seven race weekends on some of the most demanding circuits in Europe.

"The resignation of 2020 was suffered - commented by Andrea Albani, managing director MWC - and we immediately got to work for 2021, aware that this is an expected, participatory and spectacular event, completed by the commercial component and the climate unmistakable created by truckers. It will be the seasonal closing date of the European championship and prudently protects us from any restrictions that the usual date at the end of May, which will return in 2022, could reserve for us. We all obviously hope that October will be a period in which a good presence of the public in complete safety is also possible ”.

The races are 45 km rounded up or down according to the length of the lap. The start is launched behind the safety car. The speed is limited to 160 km / h (there are penalties if you exceed the limit for more than 2.75 seconds and disqualification if you exceed 170 km / h). But there are other interesting aspects of the regulation that stimulate the show more than in other motor sports.


The qualifiers work more or less the same as in formula one except that in the Truck Race for the races that give the most points (Race 1 and Race 3) there is the Super Pole mechanism.


They take the first ten of the normal pole of the day and make a second pole between them, called Super Pole. The Pole and Super Pole sessions are particularly short (10 minutes) and allow after a short warm-up no more than 4/5 laps in total, so the results depend a lot on the "traffic" on the track and for this reason there is the Super Pole institute with only 10 contenders. Let's see how the day unfolds by translating the FIA ​​regulations.


“The race normally takes place over two days. The first day we will have: 2 free practice sessions of 30 minutes (these sessions can be held the day before if necessary, in which case a 15-minute warm-up session will be organized at the beginning of the next day);
The starting grid


The other point, fundamental to creating the show, is how the starting grid for Races 2 and 4 is determined, even if they are the least "heavy" from a scoring point of view. The order of arrival of Races 1 and 3 is used, but the first eight starters, therefore the favorites since they won and placed well in the previous race, are placed on the grid in reverse. That is, the eighth place gets first place, seventh the second, sixth the third and so on. The first and second classified are therefore in the middle of the grid and if they want to score points they have to overtake. From ninth place onwards, the order resumes based on the order of arrival in the previous race. The regulation may seem a bit chaotic, but it tends to penalize the very first classified of the first races of the two days, the purpose as we have written is to guarantee the show and we assure you that this is always there. Tires and diesel are the same for everyone and managed directly by the FIA.