How important is it to make a model realistic? 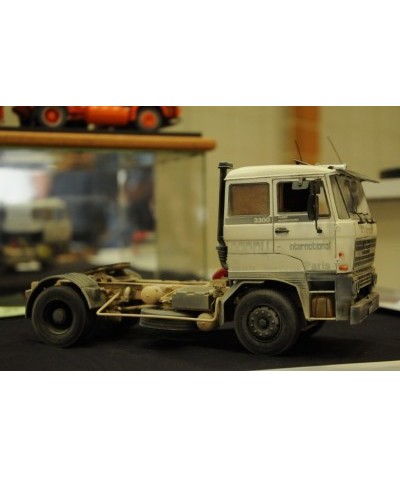 There is no real answer to this question because every model maker will have his own taste, personally I love the aged models very much because I always try to reproduce the reality.

But before talking about the techniques I would make an intoduction: it is very important to have in mind the project that we want to realize. For example we want to make a simple film of dirt of a normal daily use (dust, rain, snow, salt, mud) or reproduce a very experienced vehicle  where the weather has left its mark (sun, heat, cold, rust, scratches). Once our project is clear in our mind, and we can also help ourselves with the photos from the web, then we can start.

There are many techniques for aging or dirtying a model and many of these also need to be mixed together for a better result.

Let's start with the ones we can create with a simple brush and are: the highlighting, the washes and the filters.

Let's start by taking our shade color on gray for smog-related dirt, dark-ochre yellow for dust, dark orange - brown for rust and black for engine grease.

We initially dilute the color with 45% of water compared to the present amount of color, if we use acrylic colors or if we use other types of color we will use the relative diluent.

We will use a fine brush with soft bristles of good quality, the color thus diluted still maintains its fullness even though it is already transparent.

This consistency allows you to get the right balance to achieve the highlights.

If we dilute again up to a percentage close to 90% always with respect to the present amount of color, the color thus diluted will be in total transparency, but still able to maintain its notes for a filter effect.

Between the two solutions, the intermediate one, at 65%, allows to obtain a washing. Compared to the highlighting, a washing tends to slip on the surface due to the high surface tension reached.

The highlights are used to give light and emphasize the volumes, obtaining greater three-dimensionality in the smaller scales reductions or in small details.

The result is very soft and natural, unlike the Dry Brush, which sometimes gives a very hard and dusty effect.

The technique of washing is the most widespread and used to give depth and contrast to the realizations. It is generally used a dark color applied in the recesses to strengthen the shadows created naturally by light.

Create a balanced color effect that deceives the eye and our perception is difficult.

Washing and highlights are to be considered inseparable, complementary to each other and the use of one of the two techniques should always include the other.

Filters are useful for creating tonal variations such as fading and other effects, where the transparency of the filter must blend with the underlying tones without being predominant and invasive.

The use and merging of these three techniques can be applied to many jobs, not just to specific areas of modeling ...

Some examples of mixing the three techniques made by modellers from all over Europe and now.... enjoy yourself!!!