The "Mantova" Infantry Division was a Great Unit of the Italian Army and, after the Second World War, for forty years, together with the "Folgore" Mechanized Division and the "Ariete" Armored Division, one of the three columns of the operational units of the 5th Army Corps, placed to defend the north-eastern frontier of the Atlantic Alliance. The "Mantova" headquarters were located in Udine in the "G. B. Berghinz" barracks.
Reorganized and reconfigured several times, the Division changed its name at the beginning of the sixties to the "Mantova" Mountain Infantry Division and in 1975 to the "Mantova" Mechanized Division.
In 1986 the Division Command was dissolved and the Great Unit reconfigured as a brigade with the name of mechanized brigade "Mantova", which was suppressed in 1997 with the reorganization of the Italian Army.
In 2002 the "Mantova" Division was reconstituted as part of the 1st COMFOD as a projection command without assigned forces. In July 2013, in anticipation of the dissolution of the 1st COMFOD, the "Mantova" Division was transferred to Florence and renamed the "Friuli" Division. 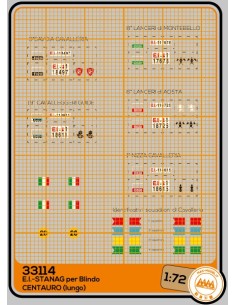 Price €7.90
Resin thick decal. Trim the decal paper and use water to apply on the model. Prespaced rivets round head for 87th scale