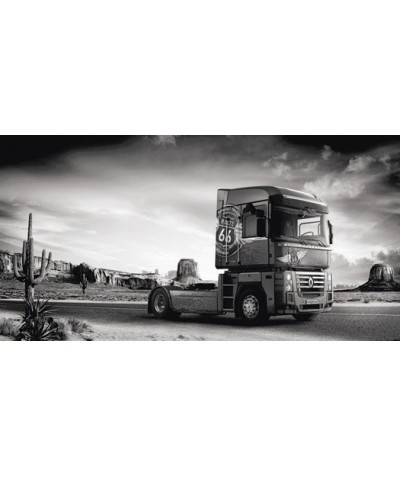 With its "ROUTE 66" in spring 2009, RENAULT TRUCKS has united two legends: the flagship of the "KING OF THE ROAD" brand RENAULT MAGNUM and the famous "ROUTE 66" which crosses the United States from Chicago to Los Angeles.

In the autumn of the same year, at LE MANS, RENAULT TRUCKS presents a MAGNUM with the colors of Route 66 during the 24 ORE TRUCKS RACE.
Given the success, Renault has launched a limited edition MAGNUM ROUTE 66 in France with specific upholstery and top quality equipment.
It has a metallic gray color typical of American tankers, the winged ROUTE 66 LOGO on the doors and the specific DIAMOND BLUE aluminum rims.
The interior is anthracite gray.
As equipment it has the OPTIDRIVER + GEARBOX, the EXCELLENCE PARK with RADIO CD MP3 Bluetooth and refrigerator under the roof.
From 3 April to 16 April the RENAULT MAGNUM was the first French truck to travel on Route 66 [3620 Km].
It is famous for onboard comfort and performance. It covers all of Europe from north to south and has become the reference road vehicle, particularly in Spain, as well as playing a leading role in the process of opening up Eastern European markets.
EUROPE and the US both use ENVIRONMENTAL STANDARDS to control traffic but, of course, they are different. The USA 07 standards are as rigorous as the EUROPE 05 ones, in a country where oil abounds, it was therefore a matter of establishing a correspondence between the two standards; moreover, due to technological differences, maintenance of European mechanical units was not possible in America because ADBLUE, the necessary additive for the SCR clean-up technology chosen by RENAULT TRUCKS was not yet available there.
To provide its vehicles with the daily assistance they would need, RENAULT TRUCKS FRANCE had to carry with it a supply of the main standard components subject to wear or breakage.

The three Renault MAGNUMs booked the transatlantic journey between LE HAVRE and BALTIMORA, with the drivers proud to have been chosen to drive on Route 66, driving a vehicle weighing over 40 tons.
In addition to them there were other truck drivers, proud to be part of a select group, ready to help with assistance in the workshops and in the places of the truck grand prix.
Support was also based on the TRUCK DRIVER'MAG magazine and its website.
In fact, it was TRUCKS DRIVER 'MAG who organized a draw to choose the two winners of this operation during the 2008 24 Hours of Le Mans, ERIC MORTIZ and JEAN-PATRICE BULLOT.

During this unique adventure they were assisted by the demonstrators of the brand in France.
On board these three MAGNUMs who have crossed 8 ROUTE 66 states, customers and employees, all passionate about RENAULT and MAGNUM, have experienced the most memorable journey of their life.

Through them, the entire world of French transport rejoiced to see the French flag waving on American soil for a while.
It was a moment of grace for RENAULT TRUCKS and for the French transport industry in general, demonstrating to the rest of the world that it and its transporters see far beyond difficulties and national borders.