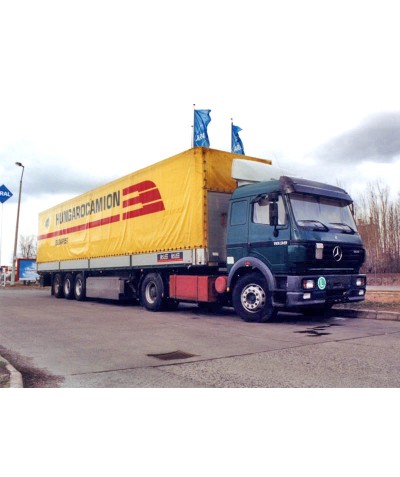 The company was founded on January 1, 1966 by the General Direction of Road Transport of the Ministry of Transport and Post and was therefore for a long time owned by the state. With the company, the government wanted to create a transportation company that could effectively serve both the socialist economic areas of Eastern Europe and the capitalist economic areas of Western Europe. The operation began with 375 own and hired vehicles. The company soon appeared on the roads of Belgium, the Netherlands, Sweden and Greece. In 1967, transport also began in Turkey, thus starting to serve the Middle East.

As a result of the new economic mechanism of 1968, traffic to the Middle East increased, the site was continuously expanded, a transit warehouse was built and the foundations of the collection base were laid. At that time, Hungarocamion was one of the most profitable companies in Hungary and was achieving measurable results nationwide.

The new Hungarocamion headquarters on Cinkotai út in 1971
The company remained in a monopoly position until 1970, as it was only after that year that it was allowed to found other national and international transport companies. In 1971, the company's fleet consisted of 534 modern trucks and vehicle combinations, mostly refrigerated. In the same year, the company's new Cinkotai út site was delivered in addition to the previous one, Ceglédi út. A vehicle assistance service has also become possible here. Also in 1971, the company's first branch in Mosonmagyaróvár was sold.

In 1973, various organizational changes were necessary, in the same year the office building in Népstadion út east of Budapest was also built.
The car fleet, meanwhile, has expanded to 1,000 vehicles, covering 51 million kilometers of goods and handling approximately $ 12 million in traffic. The number of employees in the company in 1974 reached 3,500.
The company also created a joint venture in Iran in 1975 called Iran-Majarestan Transport Co. for transportation there, but due to various difficulties, this company only operated until 1979.

In the following years, due to the intensification of competition in the freight transport market and the increase in domestic and foreign policy developments, the international transport capacity of the Hungarian company became more limited, but nevertheless reached 88 million kilometers in length. goods with an increase of 4%.
The conflicts in the Middle East in the 1980s and a ferry carrying 19 sunken trucks brought this chapter to a close.
The company set up additional rural offices to stay afloat and a new business, vehicle transport, was started.

In 1985 the new company headquarters was opened in the southwest of Budapest in Nagykőrösi út. The new plant also met the highest expectations of the time, so much so that some Western European vehicle manufacturers financed the project.
The $ 41 million loan received through a World Bank the same year gave the company another boost. With the help of this, the company, which already has 1910 vehicles.
It was then that the company changed its image, thanks to which a new logo was also proposed on the vehicles.

After the regime change, the company remained state-owned for a long time, at the beginning of the 90s the transport and shipping market also changed and the Hungarian export-import turnover decreased, while in addition to strong foreign competition private transport entrepreneurs also appeared.
The mammoth state-owned company reacted very slowly to the changing circumstances, which led to the accumulation of significant debts, in 1996 they surpassed even the share capital, it was then that it came out of state ownership and began its privatization.
The main criteria in the privatization of the company were the sale of the company and the share capital increase to be carried out at the same time as the sale of the shares.

After several unsuccessful tenders, HC-Invest Kft. Finally became the owner of the company in 1998.
Building on the valuable brand and professional experience, the new company management created an EU compliant company, strengthening Hungarocamion's financial position.
This situation lasted until November 13, 2002, when Volán Tefu, already privatized by György Wáberer, signed an agreement with the owners of HC-Invest Kft. To buy 100% of the shares, according to which it would indirectly become the owner of approximately 92% of Hungarocamion's stake.
Finally, after many years, in 2003 the company became profitable again.
The transaction created one of the largest freight forwarders and logistics in Hungary and Central Europe, which will continue to operate under the Waberer's name.
Hungarocamion ceased its activity permanently in 2006.

Corporate identity, vehicles
The Hungarocamion had a distinctive image, with the national colors appearing on the vehicles: the cabs were almost all painted dark green, the chassis was red, and the green cab had a slight white finish. Tarpaulin vehicles were given a yellow tarpaulin, while box, refrigerator or tank vehicles were white or metallic, with red Hungarocamion inscriptions on them.
The fleet was made up first of trucks type Csepel and then type Rába, then subsequently mainly MAN F7 and F8 and DAF F241, later the company was also joined by Mercedes, Scania, Volvo and then Renault trucks.